Councillor Marsie Skeete was elected the new Mayor of Merton at the council’s annual general meeting.

She takes over the mayoral duties from outgoing mayor Councillor Brenda Fraser after being elected to Merton Council three years ago to represent the residents of Longthornton Ward.

The mayor, who works as an English lecturer at HMP High Downs Prison in Sutton, said: “It is a great honour to have been chosen and I look forward to working with our many wonderful community groups and residents in the borough during the coming year. 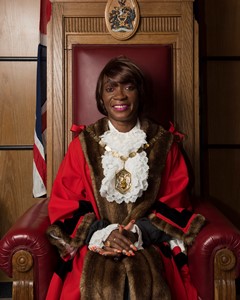 “We are lucky to be home to so many residents who really care about the borough and the people who live here. I appreciate the great responsibility of representing Merton.

“Councillor Fraser has done a great job as first citizen of the borough over the past year and I hope to be a worthy successor.”

The new Deputy Mayor for 2017-2018 will be Councillor Judy Saunders. It will be familiar territory for Councillor Saunders who has  previously been both Mayor and Deputy Mayor of the borough.

The mayor’s charities for the year will be Merton Mencap and the Commonside Development Community Trust which improves the lives and environment for the local community.