Merton council is handing out free ‘mobile ashtrays’ as part of its action to make smokers aware of the impact that discarded cigarette ends have on the environment. 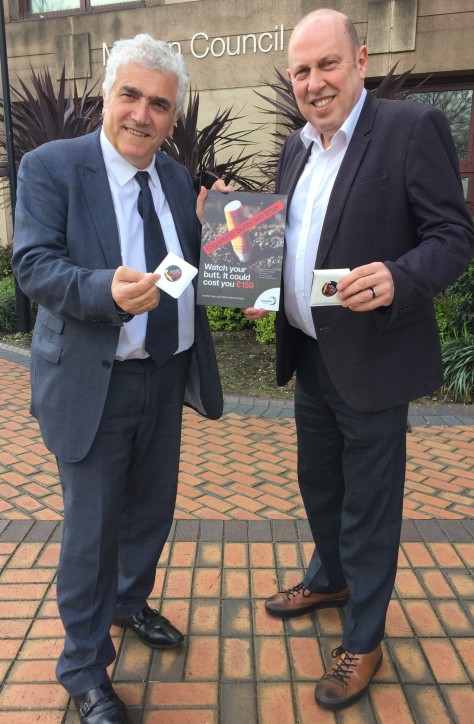 Enforcement officers are touring busy shopping areas across the borough this month as part of the council’s ongoing campaign to stamp out unsightly littering.

Smokers are being warned to ‘Watch your butt’ in the campaign, as anyone spotted leaving or throwing a cigarette end on the street in Merton now faces a £150 fine.

The officers are giving out free pouches to smokers which can be used to store extinguished cigarette ends until they can be responsibly discarded in a suitable bin.

The council, which spends millions a year clearing up dropped litter and dumped rubbish, is highlighting that, despite being small items, cigarette butts form a large amount of the litter pollution across the borough.  In addition to being unsightly and difficult to clean up, cigarette butts are packed full of toxins which are harmful to the environment and can pose a threat to health.

The campaign to rid the streets of cigarette butts is being carried out as part of the council’s zero tolerance approach to littering and all forms of environmental crime. As part of its work to stop people littering, the council issued 6,956 fixed penalty notices for offences during 2018/19.

The Cabinet Member for Environment and Street Cleanliness, Councillor Mike Brunt, said:  “One cigarette butt might be small item, but the sheer volume of them left or thrown on streets or in open spaces creates a major littering issue. Cigarette filters also contain all the chemicals smokers do not want to breathe in, so those discarded in the street potentially threaten the health of children and wildlife. We are warning smokers that if they drop a butt in Merton it could be the most expensive cigarette they have ever smoked – it could cost them a fine of £150.”

“Our borough is not an ashtray.  This is why we are reminding smokers to bin their butts responsibly or, if suitable bins are not available, to use one of the free mobile ashtrays we are handing out.”

Merton Council recognises that litter is the number one concern for residents.  Work to reduce littering has included investing in litter bins with ash trays and installing special cigarette butt and chewing gum bins in town centres in addition to continued enforcement action and awareness campaigns.

Engagement officers will be visiting Colliers Wood, Morden, Raynes Park, Wimbledon, and Mitcham to hand out pouches up until Friday April 26.