Merton Council is continuing to crack down on dog waste and litter as it launches its ‘Any bin will do’ campaign this week. 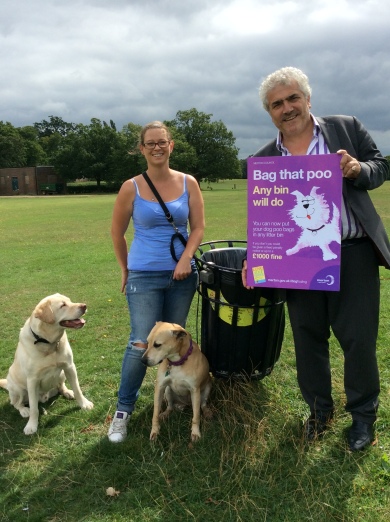 Now dog walkers can bag and drop their dog’s poo into any litter bin in the borough reducing the need to hunt round for a dog waste bin. From Sunday 23 August, Merton is also stepping up its enforcement activity as officers patrol parks and open spaces as well as town centres, issuing on the spot £80 fines to people caught dropping litter or not picking up after their dog.

Merton Council’s cabinet member for environmental cleanliness Councillor Judy Saunders said: “The majority of our residents look after where they live. The success of our Love Your Street campaign is testament to that. Sadly though there are still people who think it’s acceptable to drop litter and not pick up after their dog.

“Since April our enforcement officers have issued over 2000 fixed penalty notices to people caught littering in our town centres. We’re now stepping up our campaign by expanding the patrol to litter and dog fouling hotspots in our parks and open spaces.

“We want everyone to enjoy Merton parks and by saying ‘any bin will do’ we’re making it even easier for dog walkers, so there really are no excuses not to pick up after your dog.”

Merton resident and dog walker, Tanya Buller fully supports the move. She said: “I tend to plan my walk around where the dog waste bins are. Being able to use any litter bin will make a big difference to me and encourage people to pick up after their dog.”