Don’t suffer in silence – report hate crime. Merton Council and Merton Police are working together this National Hate Crime Awareness Week to encourage people to come forward and get help if they have been victims of hate crime.

Merton is one of the safest London boroughs, and the council has a strong working relationship with the police and other partner agencies to promote community cohesion and encourage victims to come forward.

We are asking you to get involved. Please send us your selfie with this image 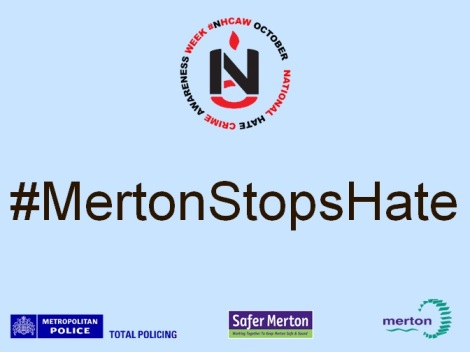 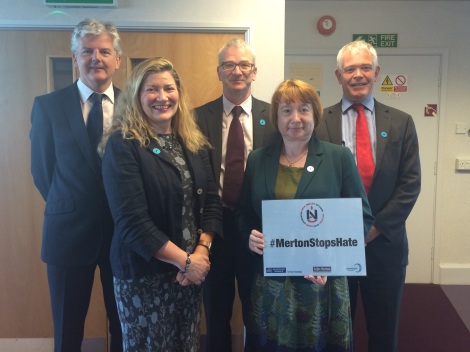 A series of events have been planned to raise awareness of hate crime and how to report it as part of National Hate Crime Awareness Week from 8 October to 15 October. 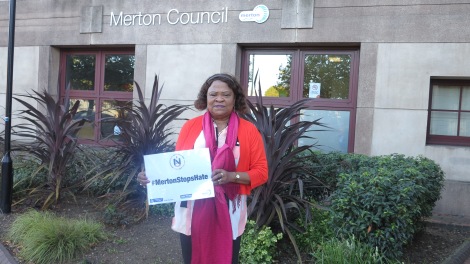 No hate crime is too big or small to report, and reporting it may help other people to avoid being victims in the future, and bring perpetrators to justice.

Hate crime can take many forms including:

Cabinet member for community safety, engagement and equalities, Councillor Edith Macauley, said: “We have a great working relationship with the police. Merton is one of the safest London boroughs and no one should be a victim of hate crime. We continue to have a zero tolerance approach to it which means we will take the strongest possible action against those responsible.

“I would urge anyone who thinks they have been a victim of hate crime, or knows someone who has been a victim, to report it to the police immediately.”

Acting Merton borough commander chief superintendent Steve Wallace said: “We are delighted to be working closely with Merton Council to encourage hate crime victims and witnesses to come forward. We stand together with the community to stop hate crime in Merton. There is no place for hate here. If you experience or witness hate crime, please report it.”

Here are the events being planned in your area:

Thursday 13 October Age UK in Mitcham will be hosting a stall at the Elmwood Centre, Mitcham, from 10.30am to 2pm.