A ten-year-old has self-published a scary book ahead of Halloween to raise money for her sister to compete in the BMX World Championships for Great Britain next year. 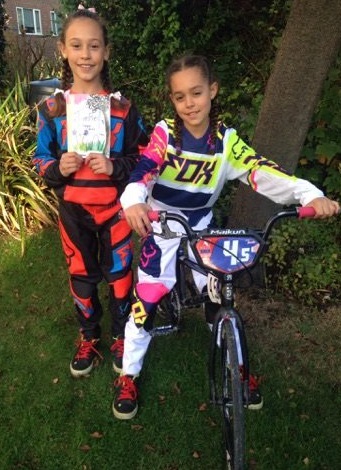 Proceeds of Teagan Jacobs’ story about a family trapped in a nightmare will help pay for her little sister Mia, nine, to travel to South Carolina in July 2017 to compete in the BMX World Championships.

The 22-page story with illustrations by artist Mea McCormick sold out the first 100 copies in less than 48 hours. A further 600 have been ordered.

The talented youngster will be selling and signing copies of her first book at Wimbledon Library on Friday 28 October and at Raynes Park Library on Saturday 29 October.

The sisters, who both go to Hollymount Primary School, Raynes Park, could have been competing together but Teagan narrowly missed out on qualifying and is instead dedicating her efforts to helping fund the £5,000 trip-of-a-lifetime for her, Mia, parents Charley Hardy and Leon Jacobs and 17-month-old Kimmy.

Cabinet member for education, Councillor Caroline Cooper-Marbiah said: “I fully support Teagan’s impressive efforts for her sister and hope they sell lots of books to raise money so Mia can compete for Great Britain. It is great to see children display an entrepreneurial spirit at such a young age.”

Hollymount Headteacher Philippa Jackson said: “We are all very proud that Mia has been chosen to represent her country at the BMX world championships and that her sister is raising money so the family can support her to take part.  It’s an amazing achievement and we wish them all the very best of luck.”

Miss Hardy said: “It is all a bit overwhelming. Everyone is saying how fantastic it is but she is taking it in her stride, I don’t think it has sunk in yet. It really is fantastic and she’s doing it for her little sister which is lovely. We’re very proud of them.”