Merton maintained schools are celebrating after another good year for GCSE results. 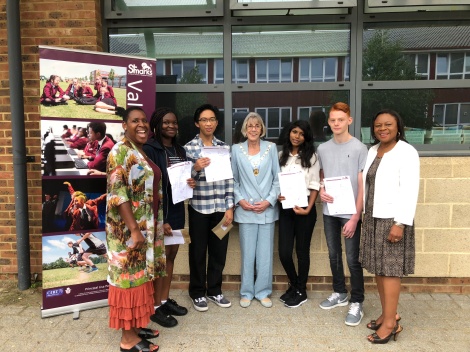 71% of Merton students have gained grades 9 – 4 in both English and maths, which  is once again well above the 2017 national average of 59%.

This year has seen even more changes in GCSEs in England, with around 90% of exams becoming more challenging. The grades obtained by students were expressed as 9 (the highest) to 1, instead of A* to G. Grade 4 and above is broadly equivalent to a C and above. Despite the raised expectations Merton schools have again demonstrated excellent results.

There were also strong and improved outcomes in the English Baccalaureate or ‘EBacc’ (grade 4 or above in English and mathematics, in science subjects, history or geography and a language) with 37% of Merton students attaining these grades, keeping Merton well above the national average of 22% last year.

Merton Council’s Deputy Mayor, Councillor Geraldine Stanford who at the St Marks when students opened their results said: “I would like to congratulate all our pupils who received their GCSE results yesterday. We have seen some excellent results this year, which is down to the hard work of the pupils and the support from the dedicated teaching staff and the families who help them achieve their full potential.”

Merton Council’s Cabinet Member for Education, Councillor Caroline Cooper-Marbiah added: I am delighted that provisional figures show 71% of young people gained grades 9 – 4 in both English and maths, well above the national average. Despite the increased challenges faced because of the changes to GCSEs, pupils have worked hard and excelled across all subjects. With secondary schools in Merton performing so well, and the borough cementing its reputation as a great place for families, more parents are choosing to live in the borough and send their children to our local comprehensives.”

On the back of the improved GCSE results, the council eagerly awaits the publication of the ‘Progress 8’ scores in October, by the Department for Education, which ranked Merton schools first in the country last year. The Progress 8 scores identify students’ progress measured across eight subjects.