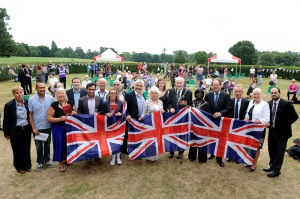 With over 100 residents in attendance at the ‘Merton Remembers’ event, professional narrators brought to life the mood of Britain during 1914 as the country went to war at 11pm on 4 August that year. Merton Council commissioned a specially scripted piece focusing on events at the Home Front in Merton and on the Front Line. Music at the event was provided by the critically acclaimed Regent Brass and community choirs. Volunteers were also invited to take part in the performance.

Mayor of Merton, Councillor Agatha Akyigyina said: “The Merton Remembers event was very special and a great tribute to those who lived, died and fought during the First World War, particularly here in Merton.” 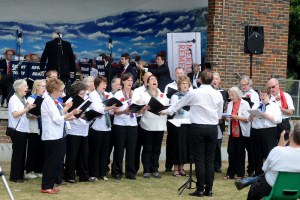 Borough Armed Forces Champion, Councillor Maxi Martin said: “It was great to see local people coming together to mark the centenary of the First World War. It is right that we remember the millions of men from Europe, including Britain, as well as all those from across the Commonwealth who went to war to fight for our freedom. Many of them paid the final sacrifice and died fighting and many more were wounded. We also remember the families they left behind who had to cope in unimaginably difficult circumstances. It was a time of disruption and of huge cultural change, the effects of which we still feel today.”

To find out more about how Merton is marking the centenary of the First World War, visit www.merton.gov.uk/mertonremembers. Photos of the event can be viewed on the council’s Flickr page.