The Rt Hon Sir John Wheeler JP DL was presented with a motion of thanks from Merton Council in recognition of the work he has done to represent the borough as Representative Deputy Lieutenant over the last 18 years. 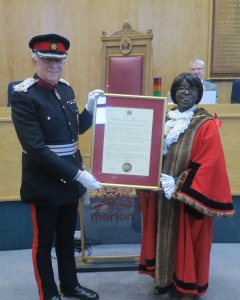 Here is the full citation that the Mayor of Merton Councillor Agatha Akyigyina presented to Sir John Wheeler at Wednesday night’s council meeting:

Resolved unanimously: that the Council places on record its sincere thanks and appreciation to The Rt Hon Sir John Wheeler, JP, DL for the dedicated manner in which he has served as Representative Deputy Lieutenant for the London Borough of Merton during the period 1997-2015.

Sir John was initially appointed in 1989 as a Deputy Lieutenant in Greater London and has lengthy service in that capacity but in Merton, as Representative Deputy Lieutenant since 1997, he is the longest serving Deputy Lieutenant in the 50 year history of the Borough. He has accomplished that role with a quiet but determined dignity, fitting of his Office. Sir John has always believed in the principle of public  service and has taken an especial pleasure from supporting the Mayors, Leaders and Councillors, in their work for the community in Merton over the last 18 years.

As residents in Wimbledon Park, Sir John and Lady Wheeler and their family have lived in the Borough for many years. Sir John has actively engaged himself in the affairs of the local community, where he is recognised for his contribution. This has led him to meet many Merton residents engaged in volunteering. Sir John has taken special pleasure in gaining recognition for the volunteer organisations in Merton and in particular supporting applications for the Queen’s Award for Voluntary Service.

One role of the Representative Deputy Lieutenant has been to nominate residents for attendance at Buckingham Palace Garden Parties in recognition of their contribution to the life of the Borough and to contribute to the review of nominations to national honours. Many people in Merton have benefited from his direct engagement and on one occasion Sir John promoted a mini-Garden Party at Southside House, Wimbledon in the presence of HRH Prince Richard, Duke of Gloucester, to expand the number of residents able to attend such events.

Over his years of service Sir John has welcomed many members of the Royal family to Merton, including HRH The Prince of Wales and HRH Prince William, Duke of Cambridge. In 2012 Sir John played an instrumental role in supporting the Borough and the Lieutenancy Office when Her Majesty The Queen and HRH The Duke of Edinburgh visited South London during the Diamond Jubilee celebrations and took lunch at St. Mark’s Academy, Mitcham.

Sir John remains in service to Her Majesty as a member of the Privy Council.