Wimbledon will become a vision of yellow and blue on Sunday 3 July as AFC Wimbledon parades through the town centre on an open top bus to mark their promotion to Sky Bet League Division One. 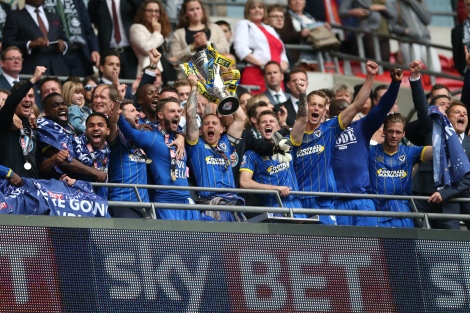 AFC Wimbledon defender Barry Fuller lifts the trophy and celebrates promotion to Sky Bet League 1 at the end of during the Sky Bet League 2 play off final match between AFC Wimbledon and Plymouth Argyle at Wembley Stadium, London, England on 30 May 2016.

An open top bus with AFC Wimbledon’s management and players on board will parade through the Wimbledon Village and town centre to show off their new silverware. The bus will then stop at the Piazza so the club can address fans and thank them for their support. The Mayor of Merton Councillor Brenda Fraser, as first citizen of the borough accompanied by the Leader of the Council, Councillor Stephen Alambritis will also be on the bus to congratulate the team for their fantastic achievement and thank them for being the ‘pride of Merton’.

Afterwards, the club will launch their new kit ahead of next season with AFC Wimbledon Players from the 1st team, Academy Teams and Girls and Ladies teams, taking to the cat walk in a fashion show at Centre Court Shopping Centre. The new kit will be on sale after, in the AFC Wimbledon pop up shop, in the former Help for Heroes shop.

Mayor of Merton, Cllr Brenda Fraser was among the thousands of fans who witnessed AFC Wimbledon lift the trophy at Wembley. She said: “This event is a fantastic opportunity for the fans to come together and celebrate AFC Wimbledon’s incredible achievement. It will be great to see the thousands who turned out for Wembley, turn up in Wimbledon and show their support by lining the streets and share in this momentous occasion.”

AFC Wimbledon Chief Executive, Erik Samuelson said: “It has been a whirlwind since we won promotion. The players worked incredibly hard last season and took a short break immediately after the promotion game, so they’re fit and ready before next season kicks off. This will be the first opportunity for the club and the players to come together since promotion and say a massive thank you to all the fans for their overwhelming support and to proudly show off our new trophy.“

Notes to the editor